The Village of Tong, Salop 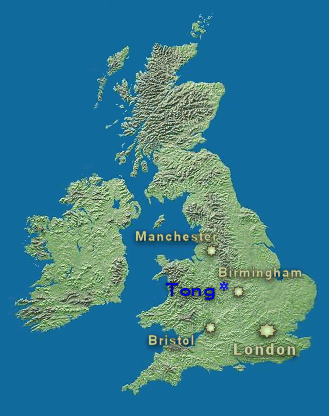 Tong is located on the Shropshire ➚ - Staffordshire ➚ county boundary north west of Birmingham, UK. Its northern boundary is Watling Street ➚ (A5), an important Roman road leading from London to Holyhead. Tong parish is dissected by the A41 - a major trunk road from London to Chester ➚. Another road, now re-routed and all but forgotten is the road South to Worcester ➚ which was a highway up to the nineteenth century joining the A41 at Tong Norton.

From the top of Tong Hill the ancient landmark of the Wrekin ➚ can be seen in the West and on a clear day the distant blue mountains of Wales can be seen behind it. It is an area of rolling hills and steep sided valleys, located on a geographical line that dissects England, water to the South goes into the River Worfe ➚ and then in turn into the mighty River Severn ➚ emptying into the Bristol Channel. To the north on the flatter Cheshire plain the water flows north and east to reach the River Trent ➚ before eventually empties into the North Sea.

The name of Tong is most likely derived from the 'tongue' of land formed by the two streams that define the southern and western boundaries of the parish. To the East are remnants of the ancient oak woodland that provided hunting grounds - and a hiding place for King Charles II after the Battle of Worcester in 1651. To the North is Weston Park ➚ the ancient seat of the Bridgeman family (the Earls of Bradford), now best known as a venue of pop concerts ➚. It has been the prestigious meeting place for talks ( Northern Ireland ➚ July 2001) and G8 leaders ➚ 1998). By contrast just to the south is the large R.A.F. training base at Cosford ➚ which houses an extensive aeronautical museum. 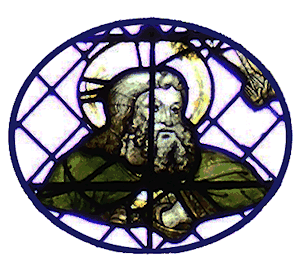 The parish of Tong covers twelve square miles with two main clusters of houses at Tong and Tong Norton. The 2001 census gave it 208 inhabitants spread amongst 100 houses. In 1841 there were 564 inhabitants in 114 houses. The occupations have changed too, in 1851 about 60% of people were employed in agriculture or related trades, by 2001 this had declined to 17%. Within easy reach of Telford and Wolverhampton its role is now mainly as a home for commuters.

Pages on this web site give details of the Tong Castle, magnificent Church and ecclesiastical College. Interwoven with Tong are the Lords of the Manor and it is the Durants that have had most the most impact. However the story is not complete without looking at the Shakespearean and Dickensian connections. An overall impression of what happened at Tong look at the Historical Timeline page.

To find out more about Tong please buy a copy of the Discovering Tong book; the profits from the sale of the book go towards maintaining Tong Church.