Tong Castle in the 11th century 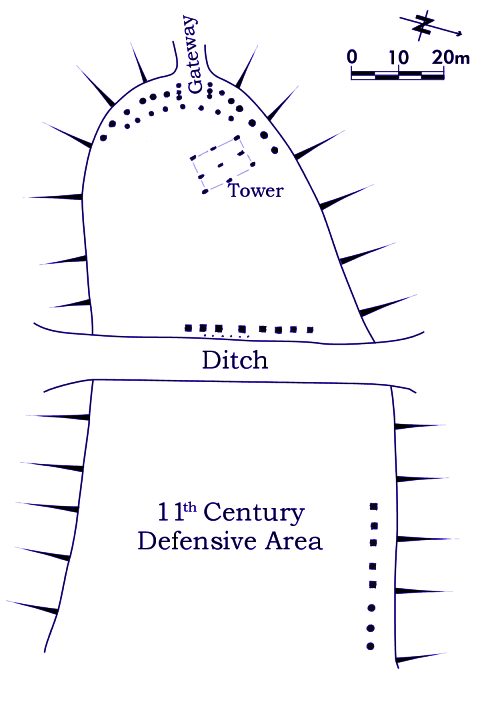 The retention of the Manor of Tong by Earl Roger de Montgomery ➚, because of its fertile and well watered soil, would have led to the necessity to defend the Manor and look after its welfare without the Earl actually residing at Tong. A defended area on the natural rock promontory, the site of Tong Castle, would have been sufficient to give protection for his workers, families and their livestock against any marauding bands of warriors still about the countryside at that time.

Although within the criteria previously discussed, it could still be called a 'castle', it has always been referred to as a defensive area, both on the excavation and in earlier reports, and so for the purpose of this Report it will retain the same description. The basic defences consisted of a continuous line of large timbers sunk into deep post holes cut into the natural rock around the promontory, with wicker breastwork between the timbers and a mixture of sand and stone built against the wicker breastwork to level out the surface to make a form of motte on the promontory.

There are, however, three phases of post holes on the promontory which could have been used during the construction of a defence at some time or other :-

1. An inner circle of small round post holes, approx. 25cm diameter, at the western end of the promontory.

2. An outer line of large round post holes, approx. 50cm diameter, at the western end of the promontory cutting into the smaller post holes especially in the gateway areas and they also occur at the north east corner of the site.

3. A line of large square post holes, approx. 75cm squares across the promontory and they also occur again at the north east corner but these could have been round post holes re-cut to a square shape as there are signs of re-cutting in more than one of them.

A further line of small stake holes, approx 10cm diameter ran parallel to, and on a cutting below, the line of large square post holes across the promontory.

The cutting of the small round post by the larger round ones, places these as an earlier timber structure on the promontory and the line of small stake holes could have been of the same period of use. An earlier use of the promontory than the medieval period would be quite in line with the finding of artefacts from the prehistoric to the Roman period in the surrounding areas, when the promontory could have been used as either a defensive or observation position.

If in fact the large square post holes are later than the large round post holes, it could suggest that an even larger area of the promontory had been enclosed by the line of timbers and whilst there was evidence in the machine cutting across the outer ditch of a shallow ditch cutting, it was so far out from the later line of the front curtain wall that any post holes in that area would have been removed by the deep outer ditch cutting. This would place a query as to why the line of large square post holes had been cut, sealing off the western area of the promontory, within the large enclosed defensive area.

Alternatively, the large square post holes could have been of the Norman period, such as at Abinger ➚ in Surrey and Quatford ➚ near Bridgnorth, with the large round post holes being of a pre-Norman period. The cutting of the ditch across the promontory, in line with the large square post holes would then have made the western are a more defensive area at that time. The possibility of a larger enclosed area whilst being in evidence from the north east post holes, must, at this time be the subject for further discussion only without further evidence.

A series of post holes for a building were cut into the natural sandstone to form a square and they were large enough to have enabled large timbers to be used and capable of supporting a two or three storied building. The upper part of the structure would have had a crenellated parapet to give greater freedom to defending archers than would a totally enclosed structure. Defending the area against weaponry of those times would have been relatively easy, with the lower part of the structure being used for accommodation or shelter.

The best known example of a similar such structure so far found, was at the excavation of the motte at Abinger in Surrey where there was a similar large timber enclosed area and a square watch tower structure. Although the motte at that site was constructed against a circle of large timbers, this being as practical a way of building a defensive area as using the top of the rock promontory, the defensive purpose was the same.