Tong Castle in the 14th and 15th centuries 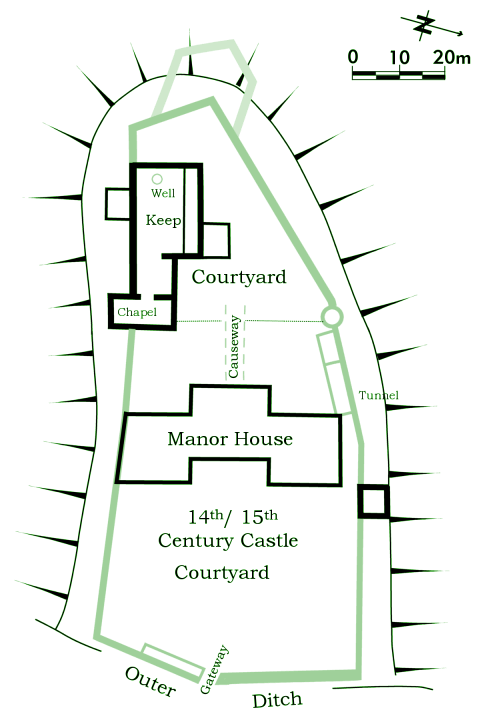 The succession of the Pembrugge Family to the Tong Estate saw a period of relative tranquillity, and with the need for a defensive castle almost gone, the building of a Manor House of ashlar faced stone by Fulk de Pembrugge II was in keeping with other buildings of that time.

The remaining parts of the 12th century Castle would by this time had been in need of substantial repair, but the need to retain a fairly substantial 'castle' building and all its prestige, was still paramount. Evidence from the excavations showed a strengthening and deepening of the outside of the overall curtain wall and this was achieved firstly by the re-building of the outside of the wall, and secondly by the vertical cutting of the bedrock below the bottom of the wall.

The Keep building was further re-built and strengthened with the northern wall increased to 4 metres wide, which would have enabled small rooms to have been built inside the wall itself, with the upper floors having room for a passageway down the length of the building when the upper part was in use. Two Square Towers were built onto the Keep Building, at the south and north sides, with the angular tower possibly being demolished either then or earlier. A further square tower was built against the north east curtain wall by, and down from, the corner of the Manor house, with post hole cuttings inside possibly for a stairway.

The building of the Manor house in the front courtyard left the Keep building to be used as additional residential and domestic purposes and the need for a well either cut as new or an earlier one re-cut was necessary within the Keep Building. The advantages of cleaning out and re-cutting a well was the known factor that there was an obvious supply of clean water in that position and also, with the water source coming from within the promontory itself i.e. a water table, there would always be an adequate supply of water.

The 'clean' nature of the well fill suggested that the Keep was used for residential purposes only, but a level of burnt material in the well, along with extensive burning along the sides of the angular tower foundations, suggested that either the Keep building roof timbers or the tower roof itself had burnt down, destroying the timbers of both buildings, leaving the need for renovation. A new floor level had been laid inside the Keep building and in one corner, the base of a glazed storage jar was found on top of the new mortared floor level.

The Buttress building was then used as chapel, with the Lichfield diocesan records confirming the attendance of a Priest forservices to the Lord of the Manor at Tong. The Inner ditch had by that time been nearly filled with the demolition from earlier castle buildings, and a causeway was built on top of the demolished gateway stone work for a better access to the Keep area.

At the time of the Peasants' uprising ➚ in c.1381, Fulk de Pembrugge IV was granted a licence to crenallate the castle, and as result the outer ditch was widened and deepened from the front gateway outwards and an impressive, if not actually defensive, gateway was built about the earlier gateway.

Although the outer cart of the outer ditch was deepened, with the stone possibly used for building purposes, the depth of the ditch at the gateway remained the same, with the ditch sloping down and outwards from the centre.

During the excavation of the tunnels and cellars under the later castle buildings in the front courtyard area, ashlar faced sections of tunnels were located in the cellar on the north side. On the south sides at the top of the stairway from the wine cellar, the remains of a set of timber slots were found cut into the ashlar faced side wall, but with the many later cuttings for the tunnels and cellars, it was impossible to explain their function in the 14th century. 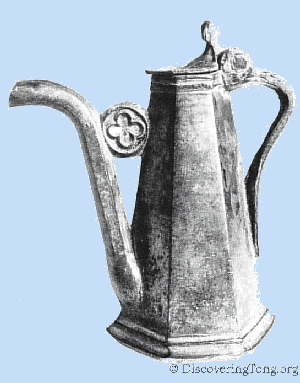